What is the function of the pancreas 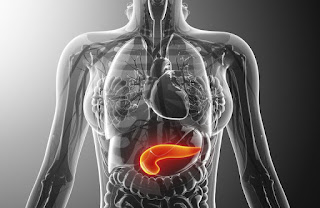 The pancreas is a pear-shaped organ 6-10 inches long, extending horizontally behind the stomach in the upper left part of the human abdomen, surrounded by the small intestine, spleen and liver. This article aims to introduce the structure of the pancreas, its functions, and the most important diseases associated with the pancreas.

The functions of the pancreas

The pancreas performs many vital functions in the human body including:

* Secretion of digestive juices: the exocrine glands of the pancreas secrete a digestive juice containing enzymes that break down food into small molecules that can be easily absorbed, and from these enzymes: - the enzyme amylase that helps digest carbohydrates.

◦The enzyme trypsin and chymotrypsin that help digest proteins and convert them into amino acids.

* Gastric acid secretion: the Langerhans Islands secrete in the pancreas a gastern hormone that stimulates the stomach to produce hydrochloric acid that helps digest food.

Insulin: a hormone secreted by beta cells in the pancreas when the blood sugar level rises, it transfers glucose to the muscles, various body tissues to use as an energy source, and stores glucose in the liver in the form of glycogen until it is needed.

◦Glucagon hormone: a hormone secreted by alpha cells in the pancreas when the blood sugar level decreases, it converts the glycogen stored in the liver into glucose and returns it to the blood, raising the sugar again.

Structure of the pancreas

When thoroughly dissecting the pancreas and examining it through a microscope it can be seen that it consists of two types of cells, namely:

* Langerhans islet cells: these are small, closely related cells that cluster in the center of the pancreas to form the islands of Langerhans, which act as a deaf gland. Four types of cells that make up the Langerhans can be distinguished, namely:

◦ Beta cells that make up 50-80% of the total Langerhans islet cells, secrete the hormone insulin, and amylin.

- Alpha cells make up 15-20% of the total cells of the Langerhans Islands, and secrete the hormone glucagon.

◦ Delta cells make up 3-10% of the total Langerhans cells, and secrete the hormone somatostatin.

◦ Gamma cells make up 1%.From the total cells of the islands of Langerhans are excreted pancreatic polypeptide.

Acinar cells are cells that surround the Langerhans Islands, which are larger, less dense, and combine to form the uveolar glands.

The pancreas was discovered by the Greek surgeon Herophilus, who lived between 335-280 BC, and hundreds of years later the Greek physician Rufos called the organ "Pancreas", a word derived from the Greek words "Pan" meaning all and "Kreas" meaning meat, in the seventeenth century the doctor wirsung discovered the main pancreatic duct, and in 1846 Claude Bernard discovered that the pancreas in 1889, the disease of pancreatitis was discovered by the physician Reginald Fitz, and in 1922, the doctor Banting showed that The pancreas secretes a substance that can treat diabetes in dogs, and in 1940 Dr. Whipple performed the first excision of the pancreas and duodenum.

Diseases of the pancreas

The pancreas may develop some diseases, including:

Pancreatic cancer: people with pancreatic cancer suffer from pain in the upper abdomen, yellowing of the skin, eyes and loss of appetite, and although the exact causes of this disease are not known, smoking and alcohol consumption are factors that increase the risk of pancreatic cancer. Palliative therapy helps improve the patient's life by only alleviating the symptoms of the disease, while treatment may include surgery, chemotherapy, and radiation.

Diabetes: Type I diabetes is caused by a disorder that affects the immune system for genetic or environmental reasons, and begins to attack beta cells in the pancreas, which prevents the secretion of the hormone insulin, while Type II diabetes is caused by the inability of the muscles of the body and the liver to convert glucose into glycogen, and the inability of the pancreas to produce

Zollinger-Ellison syndrome () is a tumor that develops in the pancreas and duodenum as a result of increased secretion of the hormone gastrin.

Pancreatic cysts are cysts that can be removed by surgery when there is a risk of cancer.