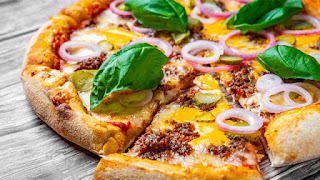 Flour - two and a half cups

Salt - half a teaspoon

Vegetable oil - a quarter of a cup

Black pepper - half a teaspoon

Ground cinnamon - half a teaspoon

Curry - half a teaspoon

Paprika - half a teaspoon

Water - two thirds of a cup

The method of work

2- Mix the ingredients well until they overlap, then cover the bowl and set aside until the mixture ferments.

3- Add the oil and the remaining flour to the mixture with continuous kneading until you get a cohesive dough.

4- Cover the dough with a piece of cloth and leave it aside until it ferments.

5- To prepare the minced meat filling: In a saucepan over a medium heat, heat the vegetable oil and fry the chopped onions in it until tender.

7- Leave the mixture over a medium heat, stirring occasionally, until the minced meat is tender.

8- Add to the saucepan the tomato paste and water and stir until the ingredients overlap.

9- Leave the mixture on medium heat until it boils and thickens.

11 Spread the minced meat filling on the dough, then spread the cheddar cheese on top.