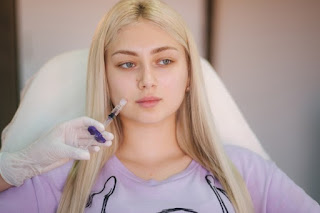 Botox injections have gained wide fame in recent times, because their action is strongly focused on reducing the appearance of wrinkles and hiding them, and now also used in the treatment of many muscle problems such as neck muscle spasm, treatment of cervical tension imbalance, treatment of hyperhidrosis in people, and bladder hyperactivity which is very annoying, and Botox has benefits in the treatment of patients with

Botox is known as a substance composed of proteins, so that it is very similar to acetylcholine in its genetic composition, which is limited in its functions in the transmission of nerve signals to the muscles, it is known that Botox treats motor wrinkles and is intended for wrinkles that appear when moving muscles and mostly that are in the area of the face and go away when the muscle is still.Botox can treat secondary wrinkles fixed on the skin that appear without movement of the muscles, but the success rate of Botox injection in this case remains

Mechanism of Botox injection for the skin

Before injecting a person with Botox, the doctor applies a local anesthetic cream to the area to be injected.

The doctor leaves the person fifteen minutes after applying the local anesthesia cream.

The doctor injects very small amounts of Botox to the person with a small needle.

Then you process is very fast and takes only a few minutes a person can recover immediately.

The benefits of Botox injections

Botox is one of the protein substances with multiple benefits and we will mention some of its benefits:

Wrinkle removal: Botox is an effective treatment in removing wrinkles and masking the effects of age, especially wrinkles that appear in the forehead area and between the eyebrows.

Under-eye wrinkle removal: the under-eye area is a sensitive area, so that doctors often consider this area very complicated and dangerous if surgery is performed, so Botox is very important to remove wrinkles in this area without any risk.

Rhinoplasty: the area of the nose is one of the most frequently performed facelift, so many people have found that Botox helps in rhinoplasty by removing the skin contouring present in it.

Treatment of certain medical conditions: Botox is used in the treatment of bladder disorders and hyperhidrosis of the hands and armpits, by reducing the nervous response, which helps reduce sweating secretions.

Treatment of cervical dystonia: this chronic condition is a common problem that affects many people, and Botox is an effective treatment to solve this problem, by reducing muscle contraction in the neck.

Lazy eye treatment: Botox helps treat this condition by adjusting the muscle imbalance in this area.

Migraine treatment: migraines are very troublesome, so Botox has a powerful effect on this condition by relieving the frequency of headaches.

Excessive irritation and redness of the skin due to allergies due to not sterilizing the injection.

The fall of the upper eyelid due to Botox, because the injection may reach the muscle of your eyelid.

Brow loosening and drooping due to the approach of the injection to the eyebrow muscle.

Paralysis if the components of Botox are not confirmed, as the latter secrete chemicals between the muscles and nerves.

See also: the benefits of plasma injection for the face

Methods of treatment after Botox injections

Methods of treatment after Botox are preventive things that we will mention as follows:

Consider not rubbing the injected area.

When sleeping it is better not to lie on the place of injection.

Take painkillers after the operation right if the pain is present.

Refer to the doctor in case of severe heat infection.